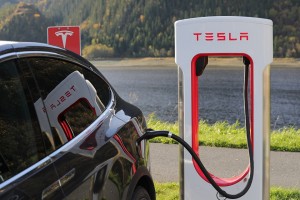 The next-generation Tesla Roadster could come equipped with a compressed air acceleration system in place of the rear seats – allowing it to cover distances at very high speeds, and potentially even to fly.

On January 8th 2019 a number of Twitter users were discussing the possibility of Tesla producing aircraft or flying cars similar to the DeLorean DMC-12 seen in the Back To The Future trilogy.

The following day, Tesla co-founder and SpaceX founder Elon Musk joined the conversation, saying: “The new Roadster will actually do something like this.”

When asked if he was joking, he added: “I’m not. [The new Roadster] will use SpaceX cold gas thruster system with ultra high-pressure air in a composite over-wrapped pressure vessel in place of the two rear seats.”

He went on to claim that this would allow Tesla Roadster drivers to “basically accelerate at the limit of human endurance” and that covering a quarter of a mile in under eight seconds would be “no problem”, before adding: “Vertically or horizontally?”.

In response to this, Musk just posted a winking emote, and nothing else.

This is not the first time Musk has hinted at the prospect of a flying Roadster – back in November 2017 he outlined an upgrade package for the next-generation Roadster including rocket technology to “enable it to fly short hops”.

However, a compressed air system could be preferable by allowing controlled jets to be directed away from the car in specific directions, improving handling, stability and cornering at speed.

This is also not the first time Musk has proposed the use of air compressor technology for levitation and propulsion – it also features heavily in his Hyperloop Alpha concept for rapid passenger transit, published in August 2013.

In this, Musk and SpaceX describe a system in which pods levitate on a bed of compressed air inside a sealed tube, while air compressor technology moves air from the front of the pod to the rear, reducing air resistance and adding to propulsion.