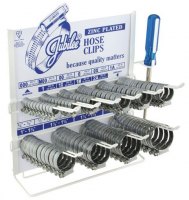 Jubilee clips are one of the global bestselling airline accessories and the brand name has become universally known as the name for an adjustable worm-drive hose clamp.

But next time you pick up one of those handy metal straps, you might be interested to know more about the history of these ever-popular airline accessories and the man who invented them.

Commander Lumley Robinson founded L Robinson and Company in 1921, the parent company of Jubilee Clips Ltd, to develop the adjustable hose clamps that he held UK patent rights for.

Nobody seems quite sure why the Commander called them ‘Jubilee clips’. There were no significant Royal anniversaries around the time that he patented the design and other theories – including that he often walked over a Jubilee Bridge – have never been proved either.

Jubilee clips are used on pipes and hoses all over the world, so it should come as no surprise that the first exports began just three years after the company was founded when Jubilee clips were shipped to the Netherlands in 1924.

The family-owned firm survived the Commander’s death in 1939 and the wartime period that followed, and remains in the family to this day – it is currently run by members of the fourth generation to do so.

With the centenary year fast approaching, L Robinson & Co continues to grow. In 2006 the company opened new premises in Gillingham that brought the whole firm under one roof for the first time – but by 2013 it had already outgrown the site after acquiring more manufacturers.

Thanks to their innovative screw worm mechanism, Jubilee clips are an adjustable, durable airline accessory capable of gripping hoses and strengthening connections, and you’ll find a range of Jubilee hose clips available from Ace Compressors.

Our stock includes handy packs of boxed Jubilee clips, workshop packs of different sizes of hose clips in a reusable storage tray, wall-mounted dispenser racks of clips, and bulk boxes of specific sizes – ideal for a wide variety of different settings and uses, including quickly gripping airlines for all sorts of reasons.